Open Door is a non-profit organisation that helps young people who do not have the financial support or resources to gain a place at one of the UK’s leading drama schools.

It came about through my work as a facilitator, as well as running auditions for the National Youth Theatre, as I met a huge number of young people who just weren’t aware of what to do next when wanting to become an actor. As an auditioner for NYT, I’ve always make sure I take the time to give the auditionees redirection, advice, and make them aware of the opportunities that are open to them.

A few years back I met an NYT member and her identical twin sister. They told me about their difficult home situation, so I offered to help them with their drama school audition speeches. They’re now both about to graduate from their final year of drama school at Guildhall and RADA. It got me thinking about how I could do the same again but on a larger scale, and Open Door was born.

Recently there’s been a lot of negative press about drama schools, more often than not, coming from people who have very little experience with them. For me as an actor, coming from the background I did, I simply don’t think I’d be doing the diverse work that I’m doing without having gone to drama school.

There’s this growing idea that training is becoming less relevant, but I don’t think that’s true. With more and more cuts to the arts, and drama being cut from the school curriculum, there may actually be an argument that they're needed now more than ever. We need to support young people who may not know that they can access this training, or even that it exists. It's important they know there is a place in the industry for them.

I simply don’t think I’d be doing the diverse work that I’m doing without having gone to drama school.

That’s what Open Door aims to do. This year our London pilot has seen us work with 30 applicants, aged 18-25, from low-income backgrounds, wanting to train at drama school. They received free auditions at RADA, LAMDA, Guildhall, Drama Centre, Royal Welsh College, and Central School of Speech & Drama, travel expenses, a series of bespoke workshops, musical tuition, 12 hours of private tutoring with top industry professionals, many of whom are from similar backgrounds to our participants.

They also get a ton of free theatre trips at Young Vic, The Bridge Theatre, Donmar Warehouse, Soho Theatre and The Royal Court, as well as a chance to perform on a professional stage.

The participants also get buddies in the industry they can talk to and get advice from such as NYT Alumni Karla Crome and Paapa Essiedu, and tutors include directors like Roy Alexander Weise, Stef O’Driscol and Gbolahan Obisesan, also an NYT Alumnus. Workshops leaders include movement directors and NYT Associates Polly Bennett and Kane Husbands, and writers like Chris Urch - so they can start to find their voices as creatives too.

From top to bottom there are no egos in Open Door, everyone believes in the project. And every patron, tutor, trustee and team member just wants to find and support these actors of quality who may not usually get the opportunity.
It seems to be working. So far this year we’ve had over 200 recalls, 86 final rounds, over 29 offers including 7 offers from Royal Welsh and 9 offers from Guildhall alone.

We try to level the playing field, and give young people who may not have had amazing opportunities within the arts, that others at, say a private school, may have had.

All this is this is not to say that drama school is the only option, not at all, but it can be a really valuable one. It’s no secret that it’s hard being an actor, so why not have everything at your disposal – why not get training and invest in your future and your career? It’s about longevity, and gaining skills which will support you throughout your life and career.

Why not get training and invest in your future and your career?

And just because you’re from a low-income background, why shouldn’t you have access to that? Those two or three years of training are crucial because they give you the chance to able to mess up in a room in a drama school, rather than in big auditions – because you don't want to mess up in those. It's a place to learn, find an artistic voice and stretch yourself in a way you might not get a chance to early on in a career.

Ultimately it gives you confidence and an empowerment in your ability to do the acting bit of the job when stepping out into this very competitive industry. That’s something we offer our Open Door participants too. A scheme offering free drama school auditions has been a long time coming. But I knew it was about more than that – it was also about giving people the confidence to believe they belong in places like drama schools. That it is for people like them.

In an audition you can never control what the panel think of you, but you can control everything else by working hard, preparing well and turning up on time and doing the best you can in the given circumstances. What we try and instil in our participants is a confidence and belief in their ability, so that they can go into the audition with the attitude ‘This is my acting, I hope you like', and hopefully that’s enough.

What this year's Open Door participants have achieved is absolutely incredible. It shows that the talent is out there. But at the moment the industry isn’t seeing it come through because there are too many barriers for young people from low-income backgrounds. But that’s all starting to change.

The hope is that next year we’ll start to roll out Open Door outside of London and the rest of the country, and continue to support those who deserve a place at drama school in reaching their goal.

David Mumeni is an actor, director and NYT Associate. He founded Open Door in 2017.

This article is part of the National Youth Theatre's Young People in Theatre monthly newsletter, giving a monthly run down on all the latest news and opportunities for young people in theatre.

Want to subscribe to the newsletter, or suggest your own company or project for a Spotlight feature? Head here 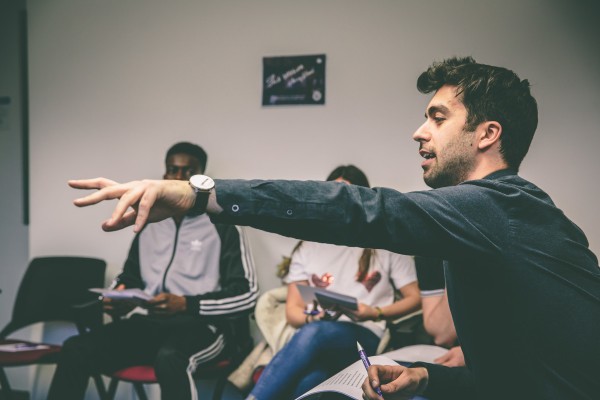