The National Youth Theatre (NYT) have announced four digital releases, including captures of NYT REP productions of Animal Farm and Othello from 2021, a feature film of The Ancestors by Lakesha Arie-Angelo, directed by Jade Lewis, and a short film by babirye bukilwa and Chris Sonnex, created in response to a production cancelled due to COVID-19.

Animal Farm will be released online on Wednesday 23 March for a limited time and available to stream for the general public on-demand until Wednesday 30 March via TicketCo, with tickets just £4.99. www.nyt.org.uk/AFOnDemand

Alongside streaming the production on demand and accessing a range of digital resources schools around the UK can book in-school workshops delivered by the cast and creative team of Animal Farm via www.nyt.org.uk/schools to support their learning of this curriculum text.

All four releases will be free to 12,000 young people who are part of the NYT’s Hub Subscription service and schools taking part in NYT auditions and curriculum workshops. The production will also be screened for local audiences including schools at NYT’s Creative Production House this spring.

Paul Roseby OBE, National Youth Theatre CEO and Artistic Director said: “Nearly a year to the day after we reopened the Royal and Derngate in Northampton after the longest period dark in its history, we're delighted to bring access to our critically acclaimed production of Animal Farm to screens in home and schools around the country. This show was created by an inventive and dedicated young company and team of artists working through all the challenges of COVID-19. Its sheer rebellious energy embodies the spirit of the company and National Youth Theatre's ensemble storytelling at its very best.”

Othello, a co-production with Royal and Derngate Northampton also starring the 2021 NYT REP Company, abridged by Dzifa Benson and directed by Olivier Award-Winner Miranda Cromwell, will be released to general public and schools in autumn 2022. https://www.nyt.org.uk/whats-on/othello

The NYT REP Tour in 2021 was supported using public funding by the National Lottery through Arts Council England. NYT is also grateful to The Clothworkers’ Foundation for its support of the Tour and the Andrew Lloyd Webber Foundation, Arts Council England, The Clothworkers’ Foundation, Ian McKellen, Helen Mirren, Sophie’s Silver Lining Fund, Spotlight and Urban Myth Films for their support of the REP Company. NYT is very grateful to everyone who has donated to The Bryan Forbes Bursary Fund for Young Directors for making the REP Assistant Director opportunity possible, especially the Forbes family and in particular Emma and Graham Clempson.

The Ancestors, written by Lakesha Arie-Angelo and directed by Jade Lewis, filmed on-location at Portchester Castle, will be screened in Summer 2022. Originally written as a play, the project has been adapted into a film, which is currently being edited by Black Apron Entertainment. The Ancestors is part of ‘Freedom and Revolution’, a Shout Out Loud initiative, and is supported by the National Lottery Heritage Fund, the Arts and Humanities Research Council (AHRC), part of UK Research and Innovation (UKRI) and the David Toguri Bursary Fund. National Youth Theatre are grateful to their principal supporters Arts Council England, the Culture Recovery Fund and to Playful Productions for their support of The Ancestors.  The research and development for The Ancestors has been supported by Shout Out Loud and the University of Warwick. More www.nyt.org.uk/theancestors

the masters house by babirye bukilwa, was due to be staged by NYT’s Playing Up Company, it’s flagship social inclusion course, in summer 2021 but was forced to be cancelled due to COVID-19. A film created in response to the piece starring the Playing Up Company with words by babirye bukilwa, music by mwen music and directed by Chris Sonnex, who is now Artistic Director of Cardboard Citizens. The film can be viewed for free on YouTube from today for one month. Find out more at www.nyt.org.uk/themastershouse

The release of these digital works is part of an expanding digital offer from the NYT, which also includes The Hub Subscription service, which offers regular  talks from industry leaders, workshops, auditions and on-demand creative content. You can sign up for the Hub Subscription here for just £2-a-month and free bursary places are available. Over 12,000 young people have subscribed to the NYT Hub since it was launched in November 2020 in response to the pandemic.

The Hub gives subscribers access to over 24 online interactive workshops and talks a year with industry leaders and NYT alumni. Recent guests have included NYT Patron Ian McKellen, Daisy Edgar-Jones (Normal People), Ṣọpẹ Dìrísù (Gangs of London) and Emma Rice (Wise Children). Subscribers can also access online resources including a self-tape masterclass with alumnus and Patron Rosamund Pike (Gone Girl, Die Another Day), a writing workshop with playwright and screenwriter James Graham (Quiz, Labour of Love) and a directing workshop with Prasanna Puwanarajah (Ballywalter). On top of this, the scheme includes the opportunity to audition to become an Acting member, to interview to become a Backstage Member and the chance to take part in Creative Leadership training with no extra cost. The Hub platform allows subscribers to connect with a nationwide network of young creatives, access community courses and events and unlock discounts for masterclasses and merchandise. Hundreds of young people around the UK auditioning at their schools also gain access to NYT’s Hub. Young people aged 11-26 can subscribe to the NYT Hub, with 14-25-year-olds eligible to audition or interview for acting or backstage membership.

The National Youth Theatre are grateful to support from Arts Council England and the Culture Recovery Fund. 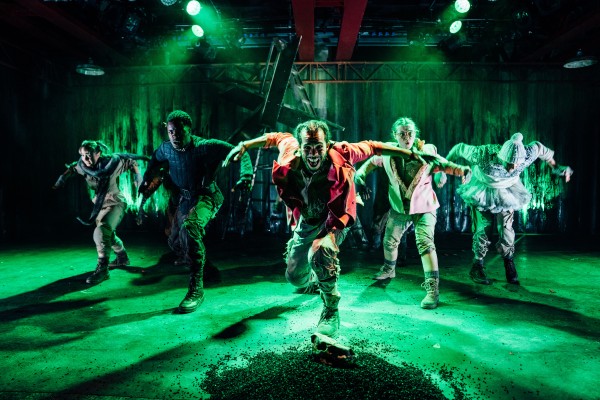