"The collective sense of youthful optimism, energy, and talent from that stage couldn’t have been more real." See images and read Vogue's review

"Steven Stokey-Daley has worked with the National Youth Theatre to produce something that is more than a collection, even more than a fashion show — something that can only be summed up as truly moving, impactful, and current." HypeBeast Review

“beautiful, powerful and mind-propelling. The storytelling complemented the clothes and made it one of the most memorable shows this London Fashion Week.” WWD Review

Stokey-Daley is a National Youth Theatre alumnus and a working-class sustainability conscious fashion designer from Liverpool. His clothes have notably been worn by Harry Styles, in his music video for ‘Golden’, NYT Patron Ian McKellen and The Crown’s Josh O’Connor at this year’s BAFTAs.

Paul Roseby OBE, CEO and Artistic Director of National Youth Theatre said: "Using theatre to animate a new fashion collective is a thrilling way of engaging our talented young cohort. Fashion and theatre are both about telling great stories with creativity, wit and invention and after the last year we need to do it more, in schools, in theatres and on the catwalk - why not! At National Youth Theatre we're all about giving young people a voice, so it was important to me that this was an opinion piece, platforming our young talent's words and lived experience at the heart of the piece. Together in rehearsals with this brilliant and articulate cast we've explored a host of topics from memories of school and class rituals to masculinity and teenage crushes. The show gives a voice to young people who've been hit hardest by the pandemic and celebrates their talent and Steven's exquisite style.”

Steven Stokey-Daley said "I joined the National Youth Theatre when I left high school in 2014. It was the first time I met likeminded people, my lifeline to culture that opened up the possibilities of what I could do. It is the biggest honour to now work with current members of the National Youth Theatre, whose input has been at the heart of my first solo catwalk collection.” 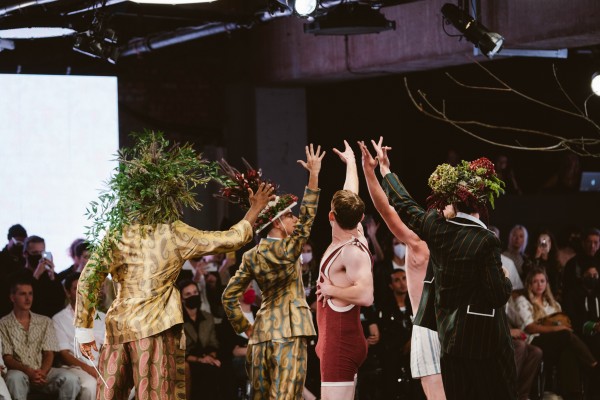