Royal & Derngate and The National Youth Theatre (NYT) are thrilled to announce a new partnership committed to providing outstanding vocational learning opportunities in theatre for up to 500 young people aged 14 to 21 in Summer 2021.

The partnership firmly positions opportunities for young people and emerging talent at the heart of Royal & Derngate’s future with the programme taking over the whole venue in summer 2021 for five weeks and the venue co-commissioning three productions with NYT. Teaching will take place on all three of their stages – Royal, Derngate and Underground – as well as in the Rehearsal Rooms and other Cultural Quarter venues. Participants will gain valuable insight into a 360-degree overview of a working theatre’s practice with time also spent with the venue’s wider staff.

Taking place in Northampton but open to young adults of all backgrounds from across the UK, the summer residency programme will offer 16 acting courses, with placements being made available for those who have completed NYT’s courses in costume design, to lighting and sound and stage management from September 2021 onwards. The residency includes a vital collaboration with the University of Northampton, with participants living at the University’s new Waterside Campus allowing them to be fully embedded in the town.

This dynamic partnership launches in February 2021 with two new Made in Northampton productions co-produced by the National Youth Theatre and Royal & Derngate and performed by NYT’s REP Company. Tatty Hennessy will adapt George Orwell’s Animal Farm as an allegory for our own times in a production directed by Ed Stambollouian (Olivier Award-winning Pinter at the Pinter) in association with Kneehigh Theatre. Miranda Cromwell (Olivier Award-winning Death of a Salesman) will direct Shakespeare’s Othello, in a new abridgement by multi-disciplinary artist and dramatist Dzifa Benson. Othello will feature Francesca Amewudah-Rivers in the title role. The productions will play at Royal & Derngate from Friday 19 February to Saturday 13 March 2021 under Covid-secure conditions with socially-distanced audiences, before touring nationally and streaming online. Meanwhile, local director Andy Routledge will lead the company in developing an original play about a unique period in Northampton’s rich and often surprising history.

The NYT is a leader in industry-based alternatives to formal training, staging productions at major venues in the West End and around the UK each year and delivering free practical courses, including the NYT REP Company and access to higher-education course NYT Playing Up. In 2021 the NYT will also run online courses after the success of summer 2020, part-time intake courses for the first time and London-based courses to offer a range of flexible routes into NYT membership. Despite the challenging climate all arts charities continue to face, course fees for 2021 have been significantly reduced in response to the impact of the global pandemic on young people and bursaries are available for those requiring financial assistance. The NYT REP Company’s productions of Animal Farm and Othello are being supported using public funding by the National Lottery through Arts Council England.

Applications to take part in the new summer vocational training with Royal & Derngate are open at www.nyt.org.uk/join-our-hub and young people can sign up to audition and access a range of online workshops and resources for £2-a-month or £24-a-year through the NYT’s new Hub subscription.

Royal & Derngate Artistic Director James Dacre comments: “Working with the NYT as a freelance director before I joined Royal & Derngate, I experienced the passion, expertise and insight with which they champion every young artist to hone their craft and find their voice. Four years ago, Royal & Derngate and the NYT partnered on a co-production of The Tempest, enabling 30 young local actors to make their professional debut, many of whom have returned to perform on our stages since. That inspiring experience left us determined to partner on widening such training opportunities across all theatrical disciplines and so we are thrilled to be able to announce an annual programme that will enable hundreds of young artists from the widest possible range of backgrounds to train at Royal & Derngate, learning from our teams and placing young people at the heart of all that we do.”

NYT Artistic Director and CEO Paul Roseby OBE comments: “This key partnership is part of our ongoing commitment to create a national programme prioritising opportunities for young people across the UK. We wanted to give more young people the chance to experience theatre on a grand scale outside of London’s West End and being part of this prestigious venue will inspire a new generation to become story tellers, creative leaders and champions of live performances in our local communities. The programme will also offer up a professional creative network, inspirational role models and vital progression routes for our 2021 company at this critical time.”

Royal & Derngate Chief Executive Jo Gordon adds: “On the back of such a devastating year for theatre but also young people who’ve had so many opportunities curtailed or removed, I am delighted that as Royal & Derngate begin to emerge from the pandemic and look to reopening, our future is focused on creating new opportunities to enable young people to have a future in theatre and become the creatives who will shape our industry in the years to come.” 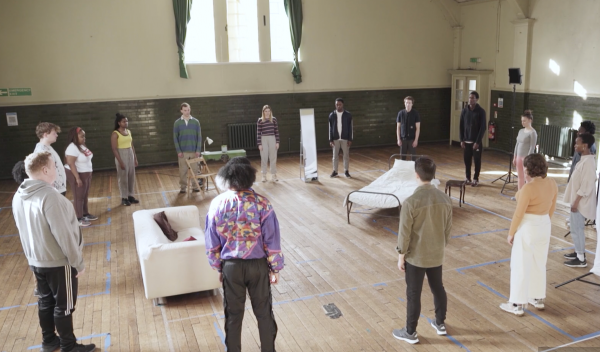