NYT announces brand new show as part of Freedom and Revolution, a new project in partnership with English Heritage through the award-winning Shout Out Loud programme, the University of Warwick and Hampshire Cultural Trust. The show, which is being produced and funded as part of English Heritage’s Shout Out Loud programme, is currently in research and development, with title to be announced, and will be performed at the impressive heritage site Portchester Castle in 2021.

This latest collaboration as part of Freedom and Revolution will explore Black history at Portchester Castle through a new play directed by Mumba Dodwell (Great Expectations; Southwark Playhouse; 2019), written by Lakesha Arie-Angelo (Graveyard Gang; Tamasha Theatre’s associate company; Purple Moon Drama), and with music by composer Elaine Mitchener (the then + the now = now time). The play will focus on the lost voices of women and particularly Black women. It is being developed with a group Black female-identifying NYT members through on-going online R&D sessions.

In 1807, prisoners of war from Napoleon’s forces on board a prison ship in the shadow of Portchester Castle performed a play entitled The Revolutionary Philanthropist or Slaughter on Haiti. The play, set in 1793, tackled the incendiary topic of the uprising of enslaved people in the Caribbean, but was told from the colonial perspective and was steeped in racist attitudes. The narratives of people captured and held at Portchester will be theatrically retold through Freedom and Revolution to create a “decolonised” site-specific new play in response to the legacy of Caribbean uprisings and the experience of Black prisoners of war and enslaved people of African descent. Staged and created with a cast made up exciting new talent drawn from the local area and around the UK, this dynamic site-specific production will explore place, power and freedom.

The best-preserved Roman fort in northern Europe, Portchester Castle was in use for more than 1,000 years, and in the late 18th and early 19th centuries served as a prisoner-of-war depot for soldiers captured by British forces during the Napoleonic wars. In 1796, more than 2,000 Black Caribbean prisoners of war were held at Portchester, including more than 100 women and children. The new play will shines a new light on the lives of the prisoners of war held at Portchester Castle and offers an important window into England’s story.

At 7.30pm on Tuesday 17th November audiences can join an artist-led panel discussion with the NYT creative team and University of Warwick and English Heritage researchers as part of the Being Human Festival, the UK’s only national festival of the humanities. Sign up to join here: https://warwick.ac.uk/fac/arts/modernlanguages/academic/ka/beinghuman

Paul Roseby, CEO and Artistic Director of National Youth Theatre, said: "After our award-winning collaboration in 2019 we're teaming up with English Heritage again to uncover another important story from our buried past. This new piece will shine a light on vital lost voices, with a focus on women and particularly Black women, and will be beautifully and poetically brought to life. The urgency of this work is more vital than ever before."

Dr Dominique Bouchard, Head of Learning and Interpretation at English Heritage said “Empowering stories of enslaved people of African heritage are seldom taught in English schools. We challenge this perception by telling the story of people from the African diaspora as agents of change and power. The story of England we tell must reflect the truly diverse breadth of people that make up our country’s historical legacies.”

Prof Kate Astbury, Professor of French Studies at the University of Warwick: “The French prisoners of war used theatre as a form of resistance and to sustain hope for an end to their captivity. In performing a play about Haiti, they created fictional characters whose lives mirrored those of the real-life revolutionaries from the Caribbean held at Portchester a decade earlier. This exciting new project will harness the power of theatre to bring their stories to a new audience and tackle fundamental questions about human rights, discrimination, identity and gender and I’m delighted to be able to share my team’s research with such an inspiring and talented artistic team”.

Mumba Dodwell is a Freelance Task Force Representative and received the 2019 NYT REP Bryan Forbes Bursary and is a founding member of The Diversity School Initiative, an organisation established to address under-representation and diversity in UK drama schools. Lakesha Arie-Angelo is Associate Director at Soho Theatre and previously directed NYT’s 2019 production of Summer Fest at the Bunker Theatre.

Freedom and Revolution is a project delivered by English Heritage, the University of Warwick, National Youth Theatre, Hampshire Cultural Trust. It is part of Shout Out Loud, a national youth engagement project led by English Heritage and with consortium partners The National Youth Theatre, Sound Connections, Photoworks and the Council for British Archaeology funded by The National Lottery Heritage Fund through the Kick the Dust programme. Freedom and Revolution is additional Kick The Dust activity funded by DCMS through the Youth Accelerator Fund. 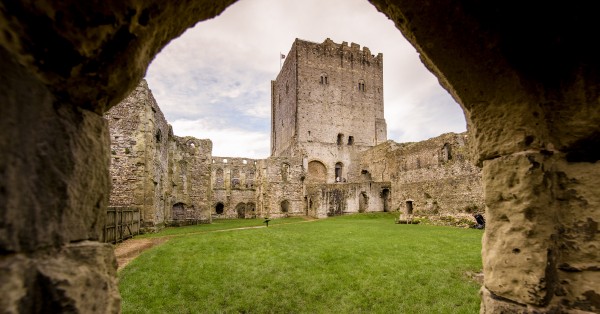