My name is Aidan Thompson-Coates and I am an actor, writer, director and theatre-maker, based in Hull in Yorkshire. I am one of the National Youth Theatre’s inaugural Centre Stage Creatives, funded by the Foyle Foundation.

As a Centre Stage Creative, my role involves connecting young people in my area to new and exciting artistic opportunities, including workshops, castings and networking.

I started acting at the age of ten and wrote my first play a year later. Fast-forward to now and I’ve had eight of my works performed across the region and also lived for a time in New York City as a budding actor.

I have also run my own company, ApposArt, for four years now, which I founded one day by accident after losing my job, getting poorly and trying to cure bed-ridden boredom. As part of ApposArt, I construct live multimedia productions, with the main practice being theatre, based on conversations and interviews with people across the country to tell real people’s stories, raising awareness for an underlying issue. So far, ApposArt has done shows surrounding such topics as male sexual abuse, LGBTQIA+ rights and identity and the men’s mental health epidemic. We’re now shifting gears to tackle our biggest issue to date: The World.

Currently, funded by the Centre Stage Creatives scheme, I am producing a piece of theatre called CLOUDED which will be performed at Hull Truck Theatre in June 2020. CLOUDED surrounds the story of two friends who decide to ‘cloud’ themselves, abandoning life on earth to become one with the digital world through an illegal ‘clouding’ process to promote positive change from inside the internet. Let’s face it: the world is in a bad way, right?

Climate change is a very real threat; Australia is still burning, we’re politically unstable and, as demonstrated very recently, the media and the press feed off and consume us, leaving us collectively devoid of love and kindness. This show is all about the small steps we can all take to change all of this. As with previous ApposArt projects, it is constructed entirely from real thoughts and opinions, and as young people, our voices are so important right now which is why CLOUDED is such an important piece to get involved with.

I am loving getting to create great opportunities for you guys and strive to continue to do so to the best of my ability!

Centre Stage Creatives is a career development opportunity for NYT members around the UK, supported by The Foyle Foundation. 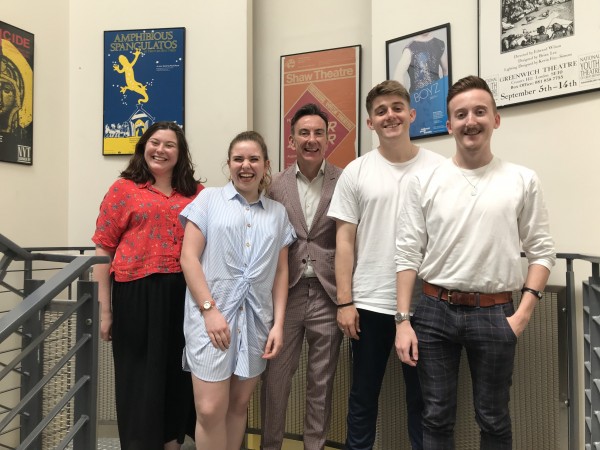