The plan was never to go into theatre; initially I wanted to be a dancer. Growing up I studied at the BRIT School where my main focus was dance, although I picked drama as one of my options, and then I did a Dance Theatre degree at Trinity Laban Conservatoire of Music and Dance. Whilst I was at Laban I came across Peter Brook’s The Empty Space, which completely transformed the way the way I thought about theatre – and introduced me to a new kind of theatre that I felt I could really be a part of.

After that, I joined every young people’s programme I could from the Almeida, to the Young Vic, to National Youth Theatre. I joined NYT through the Epic Stages course, which was such an important introduction to theatre making for me. We had the most amazing people come in to talk to and work with us, and what really resonated with me was how much they all spoke about making your own work. It made me think that actually I could make my own work, and gave me the tools to pursue that.

I then worked with NYT on Boiler Room in Leeds, and a few research and development projects including one for Wuthering Heights. It was such an interesting process which taught me that even if a piece already exists and seems distant, you can change it into a piece of your own, and make it into something you’re really excited to work on.

I joined every young people’s programme I could

Getting involved in so many young people’s programmes was brilliant because I learnt something new and something different at each and every one. At NYT I learnt a huge amount about Ensemble theatre making, whereas at the Almeida, where I did a writing project, I learnt a lot about the process of a playwright. During the project I wrote a piece which I was able to work on in the room with a cast and professional director. It was invaluable to get that opportunity so early on in my career to collaborate with a professional director in that way, and learn about the way a writer works in a rehearsal room.

My experience at the Young Vic was entirely different but equally important. I was part of their Young People’s Council which taught me a massive amount about the structure behind the scenes at theatres, and gave me confidence to get involved and share my opinions in those kinds of conversations. I’m now on the board at The Creative Society, which is a charity that helps young people into jobs in the creative industries, and the lessons I learnt at the Young Vic feed into that role all of the time.

I’d never really thought of writing as something I could do – I’d written poetry as a child, but it wasn’t until I got involved in Theatre Royal Stratford East and then later the Lyric Hammersmith Writers’ Programme that I began to believe I really could. I learnt so much from Duncan Macmillan who led the programme at the Lyric, and I was pushed to explore the writing and stories I really wanted to tackle. My writing developed massively during this time not just through the programmes I got involved in at Lyric, Soho Theatre and Tamasha but also just through seeing a lot of plays.

Going to the theatre really got me thinking about where my own work could fit in: what kind of work was I trying to create, and what kind of venues would it be best suited to?

Quarter Life Crisis came about in response to the fact that even though everyone else around me seemed to be growing up, and my young person’s railcard was expiring – I didn’t feel like I was growing up at all. I was like ‘what is this adulthood thing’, so I wrote a show about it and it’s gone from strength to strength. The reaction has been overwhelming; people have loved it because it’s resonated with their own stories, and fears. As a writer it’s so beautiful, so moving to realise ‘oh wow, people feel the same way as me about something’.

It’s a coming of age story, which takes you on the journey of a character called Alicia who’s trying to navigate this world where everyone around her is making adult choices. It’s thought provoking and relatable, but above all super entertaining.

If you’re thinking of giving writing a go, I’d say believe in yourself and believe in your voice. Get your ideas down on the page. People say they don’t know how to write, but you write all the time – on social media, in text messages, so just do it. It’ll be messy at the start, and you might lose confidence and think ‘is there any point’, but yes, yes there is! If you have a story you really want to tell, keep pushing at it, keep going, and it’ll come through.

There are also so many development opportunities across the UK, so get involved. I often get asked how you get involved if you aren’t based in London, and I always say local theatre – there are a huge number of outreach programmes out there, which are often free or heavily subsidised so take a look.

The most exciting thing about theatre at the moment is all of the new voices coming up and making their mark. Stories and voices talking about worlds they know, and that other people can relate to. There’s a breadth of messages and themes out there at the moment that are resonating with lots of people and making a real change.

This interview is part of our monthly Young People in Theatre mail out, you can subscribe here 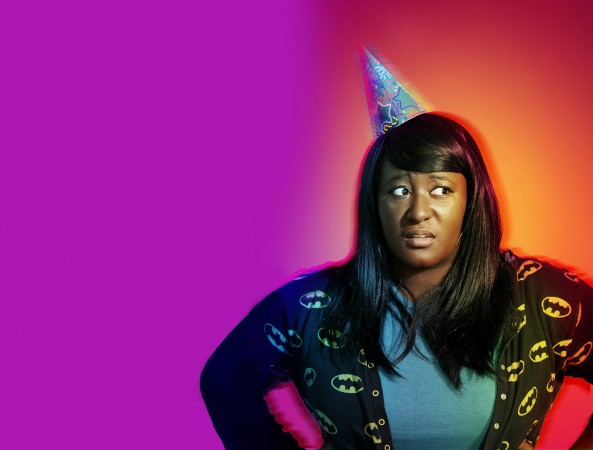