Othello abridged by Dzifa Benson, directed by Miranda Cromwell and starring the NYT REP Company opens at Royal and Derngate before a national tour.

What a time to be reimagining a play like Othello! I first started working on this production in October 2020, barely four months after the killing of George Floyd. Running parallel with that reckoning with systemic racism was a sharp uptick in the deaths of women resulting from an increase in domestic violence because of lockdown. When we were trying to decide what we wanted our Othello to do in the world, we wrestled with both these themes, inherent in Shakespeare’s original, as well as with themes of feminism, othering, jealousy, toxic masculinity and identity. In a world in which women in general, and Black women in particular, are often cast to the bottom of the socio-political pile, making Othello a queer, Black woman felt like an urgent opportunity to reflect on the intersectionality of prejudice in our society.

In the year 1603 to 1604, when Othello was most likely written, theatres were closed because of the bubonic plague. It feels like a special kind of poetic synergy that the National Youth Theatre’s Othello is one of the first pieces of theatre that people can see now that theatres are open again after our own tussle with the pandemic. I wish I could say that the world is a very different, better place to the one in which Shakespeare put racist language into Iago, Brabantio and Roderigo’s mouths more than 400 years ago. In lots of meaningful ways, the world IS a better place but as we have seen with the killing of George Floyd and the debate over controversial statues, the racism that entrenched itself within European consciousness during Shakespeare’s time is very resistant to change more than four centuries later. This means that Othello, portraying an uber-racist fear of mixing the races through marriage and sex, is still very much a play for our time as it was in Shakespeare’s day.

Simon Russell Beale, one of Britain’s leading Shakespearean actors, said of making changes to Shakespeare: ‘You can do what you like with it as long as you make coherent, emotional sense.’ We have made bold changes to Shakespeare’s original to enable us to ask the urgent and uncomfortable questions that are pertinent to our time: a script that pares back Shakespeare’s original to its bare bones of plot and language; the gender-swapped title character; the addition of another character, the Chorus; the insertion of 21st century contemporary English; setting the action in a nightclub in 1991…would Shakespeare be turning in his grave? Let’s not forget that Shakespeare himself famously abridged and remixed the sources of his stories into the plays we know and love so well today. In addition, Shakespeare was the king of gender swapping, with regards to both his characters and plot devices. This company has worked so hard to make something exciting and emotionally coherent that has something to say about our common humanity. I think Shakespeare would have approved of our remix. I hope you enjoy it too. 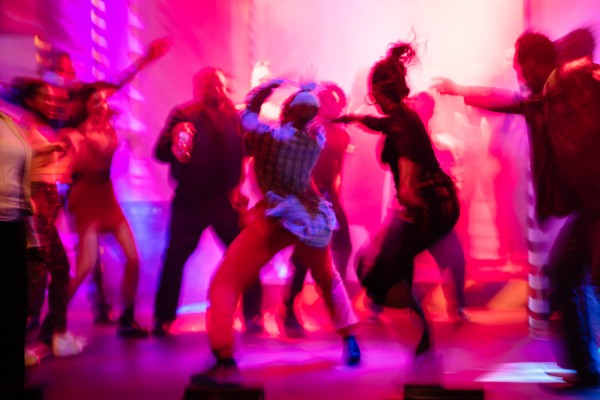