Centre Stage Creatives is a brand new career boosting talent development opportunity from National Youth Theatre for our members around the UK, supported by The Foyle Foundation.

The appointed Centre Stage Creatives are National Youth Theatre members who, over the next 18 months will work with us to facilitate, and link NYT Members to, creative opportunities in their local area, as well as receiving a £6000 grant to support their development as artists, and the production of one of their creative projects. The scheme is part of National Youth Theatre’s commitment to empowering young voices and investing in the creative, professional and personal development of early career artists. You can read more about our Creative Leadership Programme here.

Charlotte, Faye, Sam and Aidan are the first of six Centre Stage Creatives appointments that will be made over the next 12 months.

Charlotte Evans, Exeter
Charlotte was part of the National Youth Theatre’s Playing Up Company before heading to Exeter University where she studied Drama. Charlotte has directed work in London Fringe theatres and also at the Edinburgh Fringe.

In 2018, inspired by the likes of TheatreDeli, Charlotte partnered with a friend to open Maketank, a performance hub and “making space” which occupies an empty retail building off Exeter’s high street.

Charlotte hopes to use her Centre Stage Creative grant to engage young people in making their own innovative and original performance work. The bursary will also support Charlotte in her role at Maketank, making it easier to focus on the work she delivers for the organisation.

Faye Donnellan, Liverpool
Faye Donnellan is a loud passionate creative who proudly lives in Liverpool. She was accepted into NYT in 2018, and since then has continued to write and act, whilst also producing and directing for her all female production company The Tempest Studios.

Faye is using the funding to develop The Biting Back Scheme, a community workshop scheme focusing on the issues of women in the work place through verbatim text and popular music made for both theatre and film enthusiasts to enjoy. Faye is ecstatic about receiving the Centre Stage Creatives grant, as the funding has provided her with not only opportunities for her local community, but also to develop and network as a productive northern artist.

Sam Parker, Plymouth
Born in Torbay, now living in Plymouth, Sam is a playwright who is on emerging artist schemes with the Theatre Royal Plymouth and Doorstep Arts. He is co-founder of The Narwhal Ensemble, a devising company whose second show ‘2021: A Cornish Space Odyssey’ opens later this month, following on from ‘Whey Down South’ which toured the South West.

He is also Co-Artistic Director of Down Stage Write, a company committed to providing opportunities for Playwrights in Devon and Cornwall. Sam currently works as a facilitator for the Theatre Royal Plymouth’s Engagement and Learning department, and Far Flung Dance Theatre.

Aidan Thompson-Coates
Aidan Thompson-Coates is an actor, writer and director from Hull, representing Yorkshire as a Centre Stage Creative at the National Youth Theatre. He has been an NYT member since 2017. Aidan has run ApposArt Theatre Company since 2016, which he founded to create productions that combine theatre and cinema to speak out for sheltered causes and has raised money for various charities consequently. He produced the first Hull production ever to be streamed out of the city and the first ever UK Pride production respectively. Stay tuned to see how he’ll bring NYT and various opportunities to the North East. 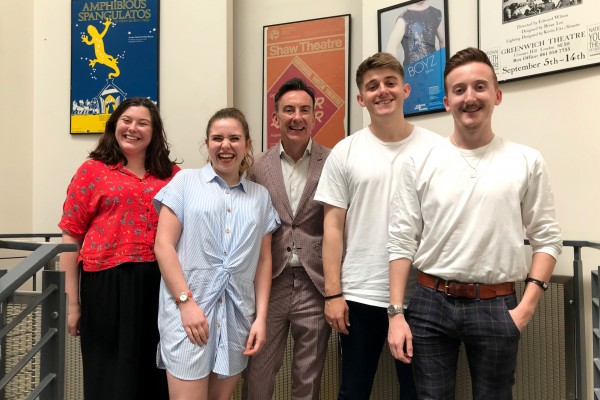